Today, we are doing the 10k Lincoln Capital walk. It is supposed to be a hot one today, so the earlier the better. The temperature when we started at 7:30 a.m. was 76 degrees.

On our way to Union Station and the Haymarket District, we saw a number of cool things, including art. We walked through the P Street District and past buildings from the days of yore.

Photo below: Gold's & Company, founded in 1915 as The People's Store. Brandeis department store merged with Gold's in 1964. Brandeis went out of business in 1980. The building is now Gold's Galleria.

The building below used to be the U.S. Court House and Post Office or, alternatively, "The Old Federal Building." Today's new name, "the grand manse" or great house, is filled to the roof with marble, terrazzo, oak, maple, brass, and many other fundamental building elements from 1904 when it was built. It didn't exactly look inviting, so we didn't go in.

I really didn't know much about Lincoln's history, so I did some research on lincolnhaymarket.org/history. Wow! It's quite different from what I expected. The following quote is taken from that website.

"In 1859, a handful of settlers met on the banks of Salt Creek to organize Lancaster County in the Territory of Nebraska. As the county seat, they selected a grassy plain on the east bank of the creek, about a mile southeast of a natural salt basin. The county's founders believed that a profitable industry collecting salt could be developed there, but they were proven wrong. Instead, the future of Lancaster, the little hamlet which had 'no original reason for existence,' lay in the political squabbles over the location of the state capital for Nebraska, admitted to statehood in 1867. Following [a] protracted and fierce debate in the Legislature, a Capital Commission was empowered to select the location. In July 1867, the commission...voted to make Lancaster, renamed Lincoln, the Nebraska capital.

"The 'Haymarket' name can be traced to...a 'Market Square'... That square was an open-air market for produce and livestock, as well as a camping ground for immigrants and a general gathering place. Wagons and animals thronged Market Square...

"When the federal government was persuaded to erect a post office and courthouse in Lincoln in 1874, the city and state donated the original 'Market Square' and moved two blocks north...creating 'Haymarket Square'...Scales were provided for weighing hay, cattle, and produce. Haymarket Square continued 'to provide space for the teams and wagons of country folk, a mart for hay, and a camping ground' well into the 1880s. It became the location for the first City Hall from 1886 to 1906.

"The Haymarket name survives in the historic warehouse district immediately west of the old Haymarket Square...

"In Lincoln's first years, the area we call the 'Haymarket.' was a place of small houses and retail stores. As the town grew, and especially as it succeeded in the 1870s and '80s, in attracting railroads to the Salt Creek bottomlands, wholesale jobbing and manufacturing businesses began displacing the stores and houses east of the rail yards...

"The 'wholesale jobber' of the late 19th and early 20th centuries was the new middleman in the distribution of goods. Rather than selling goods owned by others and earning his living on a commission basis, the jobber purchased goods from manufacturers and utilized traveling salesmen to sell directly to retailers. Manufacturers could concentrate on supplying a relatively small number of jobbers, rather than marketing (and extending credit to) hundreds of shopkeepers. Retailers could deal with traveling salesmen, rather than searching for their own suppliers. And the jobber, by holding title to the merchandise, took a greater risk than the commission merchant and had a greater opportunity for profit... By 1904, Lincoln's market region included not only all of Nebraska, but the Black Hills of South Dakota and portions of Wyoming, Colorado, Montana, Kansas, New Mexico, and Utah. Only Omaha, with its river port and rail hub, boasted a larger jobbing trade in Nebraska.

"The jobbing trade had three hallmark building types: hotels for traveling salesmen, warehouses for the merchandise, and railroad depots and train yards for the shipments." 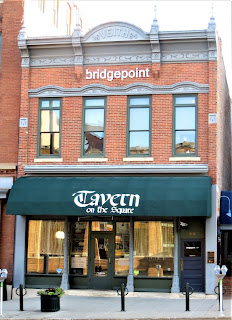 There's a lot of art in the Haymarket District, especially around Union Station. 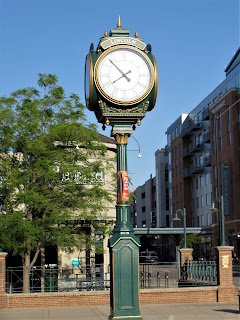 The next few photos are taken in Bill Harris Iron Horse Park. The centerpiece is this gorgeous bas-relief, carved brick mural, carved by Jay Tschetter and fired at Yankee Hill Brick in Lincoln. Coming in a close second is the Chicago, Burlington, & Quincy (CB&Q) Steam Train locomotive 710. 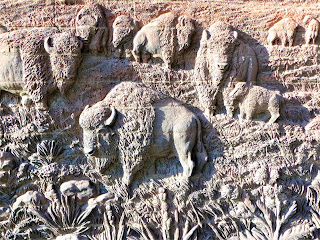 Since I mentioned art in the Haymarket earlier, Lincoln has not one, not two, but THREE types of city sculptures: hearts, serving hands, and light bulbs. I guess people like painting fiberglass sculptures in this town!

As we continued around the Haymarket District, we entered the Pinnacle Bank Arena blocks. Pinnacle Bank Arena is home to the University of Nebraska's men's and women's basketball teams. Just across the street from the arena is a food court with all types of restaurants. Bob said it is probably packed with game-goers during the home basketball games.


Before we knew it, we were walking through the University of Nebraska campus. We saw "Archie" the woolly mammoth, a beautiful bell tower, Memorial Stadium, and the old "Coliseum."


We then took "Q" Street from 14th to 21st St. At 18th St. we had a great view of the capital
I was not feeling well and stopped to use the Port-a-Potty at the 21st St. trailhead parking lot. I told Bob I just didn't feel well.
I reluctantly continued walking down to the hike/bike trail by Antelope Creek. That's when the stomach cramps hit and I got goosebumps on my arms, even though it was probably 90 degrees outside. I know the symptoms of heat exhaustion. We stopped underneath the overpass where it was cooler. I put my back against a cold concrete wall and there was a cool-ish breeze coming in under the bridge. We stayed there for about ten minutes. It didn't get better.

A few hundred feet back, there was a Hub Café. I told Bob, "I need to go in there to cool off and get something to eat." We returned to the café. I ordered orange juice and a big chocolate chip/sea salt cookie. Bob also brought over a big glass of iced water. After sitting in the air-conditioned café for 1/2 hour, drinking the orange juice, eating the cookie, and spending some time in the restroom, I felt like I could continue. [Click on the heat exhaustion link above for more information. Familiarize yourself with the symptoms and what to do so you don't end up with life-threatening heat stroke.]
We resumed the walk and I walked in the shade whenever possible. There was a never-ending supply of art and architecture on this back half of the walk. We stayed along the creek for a while and then exited onto Capitol Parkway. In a few blocks, we came to Lincoln's Sunken Garden.


Thankfully, we entered an established neighborhood with lovely homes and large trees--lots of shade! Those trees make about a ten-degree difference in the temperature. 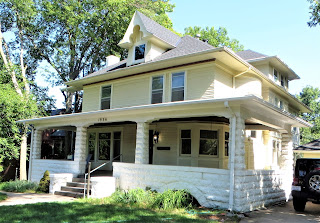 In the photo below is the Kennard House. In 1869, John K. Winchell of Chicago designed masonry homes for each of the three men on the Capital Commission. All of the commission members' homes were very near the capital. The only remaining home of the three is the Kennard House. It is Italianate domestic architecture, the leading American style from about 1885 to 1875, Nebraska's pioneer period.
What makes up the Italianate style?
The foundation is made of sandstone quarried from Antelope Creek.
From here, it's just a stone's throw to the Capitol. The Capitol is amazing for a skyscraper structure. Inside, it looks like there are multiple domes on the main floor, even though the main dome is 21 stories up. The building is constructed of Indiana limestone. On top of the state capital is a statue of The Sower.
The Lincoln capital is laid out in the form of a cross. Below is the southern pavilion. Across the top of the pavilion are Lee Lowrie's engaged sculptures of great lawgivers through the ages. Above the doors pictured here are Moses, Akhnaton, Solon, Solomon, Julias Cesar and Justinian. The full list includes Minos, Hammurabi, Marcus Aurelius, St. John, Charlemagne, and Napoleon.


So, all the interior state capital art in the photos above is on the main level. Next, we took the elevator up to the Memorial Chamber on the 22nd floor. Oh my goodness, this place is like a maze. You can go in and out the doors to the outside and view Lincoln from all four directions. (It is fenced in so you won't fall.)
Then go inside to The Memorial Chamber. Here is the brochure description of the Memorial Chamber:

"Amber glass and black marble create a dignified chamber where public heroism is honored. Italian Porto Oro marble panels rise up between the eight murals. The Vermont Verde Antique marble walls are trimmed with Belgian black marble. The blue and gold Guastavino tile dome symbolizes the dome of the sky above the plains of Nebraska with a red and gold sunburst shining 70 feet above the floor...Two bronze plaques memorialize those who fell in the Civil War: Lincoln's Gettysburg Address and the 1868 Memorial Day Proclamation..."

Below are three of the eight murals.

We finished our self-guided tour and made a beeline back to the truck. With the added walking touring the capital, our 10k turned into an 11k. It was time to go back to the 5th wheel, eat lunch, and shower. We have plans for the afternoon too.
[To be continued in Part 2.]
Posted by TravelBug-Susan at 10:00 PM