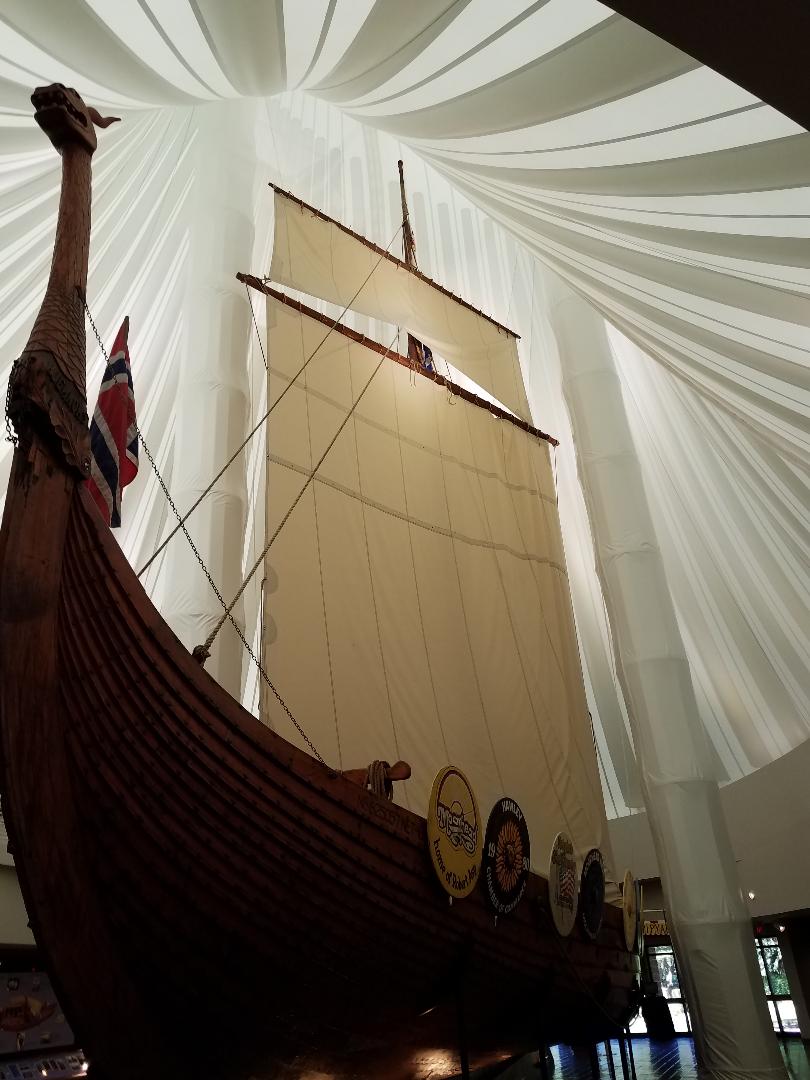 Tuesday afternoon, June 8, 2021: After resting in the 5th wheel, Bob said he wanted to do the Kanopolis Lake Legacy Trail, an 80-mile, self-guided auto tour of the area. I love spontaneity! Let's go!

So, we set out to see what there was to see in south-central Kansas. We were prepared with a US Army Corps of Engineers brochure (with a driving map and 27 points of interest) that Bob had picked up at the COE Campground Info Center. [Note: If you click the link above you can see the whole brochure!]

Our first stop (POI #1) was just behind the Kanopolis Lake Information Center at the outlet of the dam just upstream from our campsite. The Smoky Hill River was gushing down the hill. Our brochure gave us this information about flood control provided by the dam:

The Kansas River Basin is subject to infrequent but surprisingly destructive floods. In 1826, a solid wall of water from the Kansas River reached the Missouri [River] and submerged the bottoms at 10-12 feet. In 1844 William Bent, in traveling across the plains, had to follow the divides between rivers as "every river was full from bluff to bluff." The newly established town of Ellsworth was flooded in 1867, causing the town to relocate to its present site. Following the destruction of the 1938 flood on the Smoky Hill River, public sentiment turned in favor of flood control. The first project selected for the Kansas City District of the U.S. Army COE was Kanopolis Lake. Construction began in 1940, but was halted in 1942 due to World War II. Construction activities resumed in 1946 and the project was completed in 1948.

We drove across POI #2 which was Cooley's Crossing (now a bridge). On the north bank of the river, you can still see wagon cuts. [NOTE: Because of lush vegetation from recent rains, we could not see the wagon cuts.] Local homesteaders used the Cooley Crossing to travel to Marquette, Kansas, to obtain supplies and grind their wheat at Bacon's Mill. We passed by POI #3 which is Giles Family Cemetery.
From here, we headed across the highway to the Venango Park COE campground. It was a pretty campground as well. There is a swimming beach just behind the dam. POI #4, the Venango Post Office, was located approximately where the swimming beach is now.

POI #5 - Riverside Division was one of the largest ranches in Kansas.  It became known as the Sherman Ranch from 1889-1902. The ranch grew to 40,000 acres and Riverside became one of eight divisions of the ranch. Extensive farm and hog operations used to operate out of this ranch.
POI #6 - Loder Point/Early Settlers Dedication. The Loder families were farmers and stockmen who came to the area from Fort Ellsworth. They became the keystones to the population base along the river valley. This site is dedicated to the settlers of Smoky Hill Valley. Loder Point is located in Venango Park.
POI #7 - Anderson Stage Station/Petroglyph Site (located in Horsethief State Park). An inn/stage station was built near this site. We did not see any remains. The Inscription Rock Petroglyph site is no longer accessible to the public. Weather changes and lake elevation have taken their toll on the petroglyphs.
As we drove along, we had great views of POI #8 -Rangeland Vistas. The area to the west of the road is a good example of the Smoky Hill uplands characterized by thick sandstones of the Dakota formation.
POI #9 - Terra Cotta. Yes, this town was named for red clay in the area that was shipped to pottery makers. But this town was also known, from 1886 to 1912, to have the busiest stockyards between Kansas City and Denver. There used to be a whole community here. Today, nothing remains except the railroad track.
I should note that this driving trip is a real adventure. We were out in the middle of the Kansas plains and sandstone, driving on roads that ranged from paved to gravel to sand and/or mud. It's a good thing the COE map on the brochure is so detailed because I had to study it carefully to make sure we made all the correct turns!
POI #10 - Carneiro. The Smoky Hill Trail crossed Elm Creek at the site of the present town of Carneiro. In 1866, the Kansas City and Santa Fe Stage and Mail Line began to travel the military trail. Several extensive sheep ranches were established in this area. Carneiro, which means sheepfold in Portuguese, grew into a commerce center for the sheepmen.
Our next stop, POI #11 Mushroom Rock State Park, was my favorite place on the tour! It's described as a geological phenomenon of sandstone spheres balanced on softer pedestals of sandstone. The Smoky Hill Trail crossed in this vicinity and travelers would venture off the trail to visit the rocks (much like what we're doing today). Mushroom Rock is the smallest state park in Kansas (five acres). 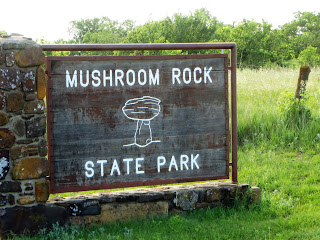 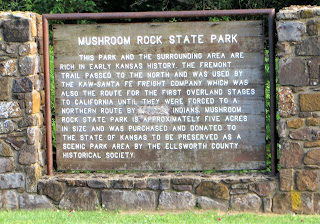 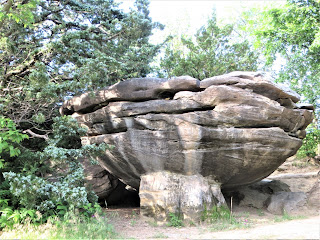 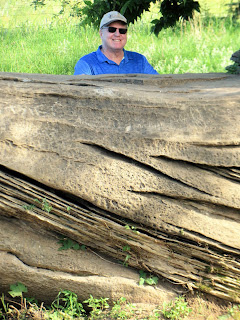 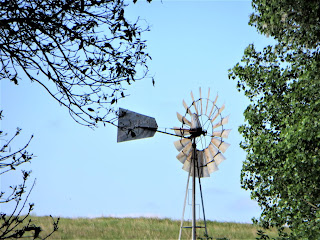 I am going to skip Points of Interest #12-#17. If you want to learn about those, you can read the brochure at the link above.
Fort Harker, POI #18, was very interesting. The success of the military campaign against the Cheyenne in 1864 led to the establishment of Ft. Harker. It was a base of operations for future Indian campaigns, a supply depot, and a hospital. The quartermaster's department numbered more than 1,400 civilians. The civilians helped with the freighting of supplies used in campaigns farther west. Fort Harker was visited by many famous individuals of the West. Generals Sheridan, Sherman, Grant, Hancock, Miles, Sulley, and Forsyth served here, as well as General George Custer and his 7th cavalry. Both "Buffalo Bill" Cody and Wild Bill Hickock were scouts for the military.
From early summer to the fall of 1867, Asiatic cholera hit the fort. According to the post surgeons, 892 cases of cholera occurred at Fort Harker; 46 soldiers died. In addition, 83 cases and 29 deaths were reported among local citizens and employee civilians.
Railroad development farther west reduced the need to supply other forts from Fort Harker. The fort was deactivated in 1873. Of the surviving buildings, the guardhouse is maintained as a museum. The museum was not open when we were there. 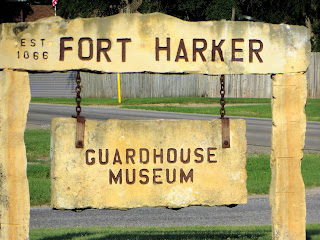 The evening was so nice. We had perfect weather for our exploration. It was really fun to follow the map all around the Smoky Hill River area of Kansas. If you're interested in information about hunting, farmland, and ranches, you can read #s 19-26 in the brochure link.
Here are a few more photo impressions from our drive. 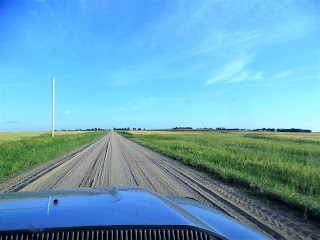 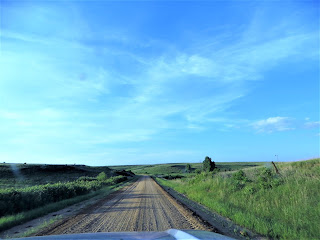 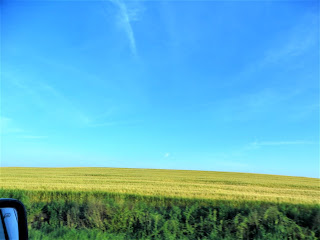 We have reached the last POI on our auto tour. POI #27 - Control Tower/Kanopolis Dam. Prior to the construction of the dam, the Smoky Hill River occupied a wide, flat-bottomed valley with gently sloping sides. The flood plain of the valley was one to three miles in width. The river flowed through the valley in a shallow channel, meandering from one side of the valley to the other.
The Kanopolis Dam is 15,810 feet long and has a maximum height of 131 feet above the stream bed. Water is released from the lake through a concrete tunnel, 14 feet in diameter and 2,443 feet in length. The control tower contains the operating machinery for discharges. Controlled flow through the tunnel is regulated by two gates (7' x 12'). An uncontrolled outlet maintains normal water flow to the river when the main gates are closed. Kanopolis Lake is the first man-made lake in Kansas.
The 80-mile auto tour took us about four hours. We got back to the campground at dusk.
Sunnie is doing better. He has started to lap a little water. Dr. Mollie wants to see him tomorrow morning. We will stop by the Lindsborg Veterinary Medical Hospital when we're on our way out of town.
Wednesday, June 9: Sunnie had a small amount of diarrhea overnight so we made sure to give him his anti-diarrheal medication this morning. Dr. Mollie checked him over this morning. His glucose was still very high. He had lost weight to 14.5 pounds, which is a lot for him. She injected subcutaneous fluids to help rehydrate him and rubbed an appetite stimulant on the upper inside part of his ear which will absorb slowly into his system. She is keeping him on three units of insulin twice a day (which is double what he had been receiving for the past 1-1/2 years). She recommended we feed him Royal Canin Glycobalance and Recovery wet foods. She had some at her office and sold us a few cans.
Today, we traveled 214 miles to Pawnee State Recreation Area NE, Lakeview Campground, in Lincoln, Nebraska. It was an easy driving day. Sunnie did very well with no further issues. He ate his dinner (he loved the new cat food!) and drank water. Things are looking up for the love sponge cat.
After we got settled into our back-in site, Bob went for a bike ride around the campground. He is really enjoying riding his bike everywhere we go.
Tomorrow, we will do the 10k Lincoln, Nebraska, Capital Volksmarch.
Travel Bug out.
Posted by TravelBug-Susan at 11:30 PM