It's been a long couple of weeks...working six days with only Sunday off; so we made the most of it. First off, we slept in! Ahhh, so nice to feel refreshed again. Eyes feel brighter, steps feel lighter and mood is politer.

Our 45-minute drive to New Braunfels was uneventful, though there were some speed traps along the way in Schertz. Starting point for our 11K New Braunfels walk was at Faust [historic] Hotel. The day was overcast so the temperature stayed in the low 70s all afternoon, making for a comfortable walk.

New Braunfels is known for the Sophienburg Museum, fresh-water springs, Naegelin's Bakery, Landa Park, Schlitterbahn Water Park, tin roofs, the Founder's Oak Tree, beautiful old homes, and the Wurstfest in November. We saw all of those and more on our walk today.

When we exited the hotel, we made a wrong turn and went a block in the wrong direction. Our printed instructions left off the first couple of turns. (The first directions were on our walk envelope.) When I remembered that piece of trivia from the last time that Peri and I did the walk, we got ourselves straightened out and we were off.

Quite a few murals grace buildings in New Braunfels showcasing the history of the area and the town. The murals are so large it is hard to capture them in a photo as you can see below...

The first three photos are part of the Spass (fun) & Gemutlichkeit (fellowship) mural which spans the length of a restaurant/bakery wall. 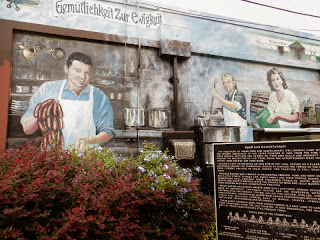 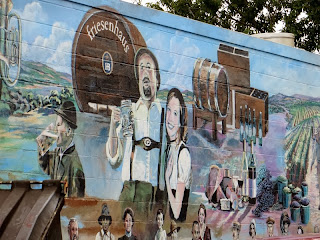 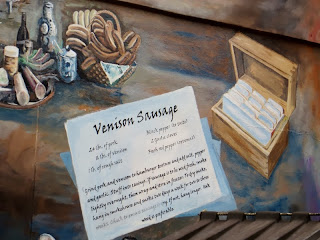 The next building we passed also had a huge mural, Founding - City of a Prince, depicting German settlers arriving in America.
Historic downtown New Braunfels has a very old hardware store. When we walked past it and looked in, it looked like a museum with beautiful oak floors and wooden shelves. This store invites further exploration at a future date when we're not doing a 6.8 mile walk and spending time at Wurstfest.

As we walked through the neighborhoods on this cool November day, we were surprised to see the number of Halloween decorations still out. 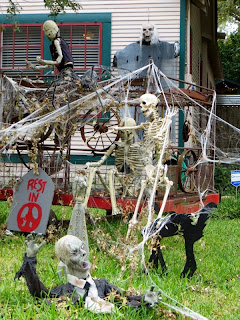 At the Railroad Museum, we took a detour to check out some old trains cars.

Do you know the use of the building below? 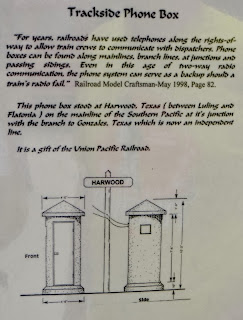 Our walk continued down the other side of the main street (San Antonio Street) until we came to a round-about, where we made a left-hand turn and headed for Landa Park and the Wurstfest.

German towns have mai baum (may poles) in which the history of the city is recorded with scenes. This is New Braunfels' mai baum.
A plaque in front of The Founder's Oak lists historical occurrences from the time the tree was a sapling in 1700 until 1986, the year of Texas's sesquicentennial (150th anniversary). The tree is now over 17' in diameter and over 300 years old! From the plaque I learned in 1866 a city ordinance was passed that prohibited flammable roofs resulting in New Braunfels being called "The City of Tin Roofs." 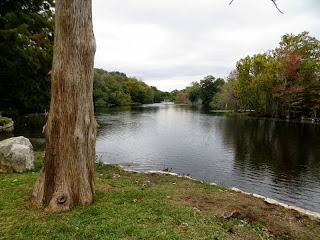 A couple of pics from the arboretum...

Upon leaving Landa Park, we walked past the Wurstfest grounds, making our way to Gate #3 where we used our admission tickets from last week's Volksmarch. I will write a separate account of the Wurstfest in my next blog.

After spending time in the festival grounds, we continued our walk along the Comal River, shortest river in Texas at 2.5 miles. Even though it's November and the temperature was low 70s, some hardy folks were "toobing" the river. One man told us the river temperature is 72 degrees, which is very similar to the air temperature.

The following photo is a small diorama over the entrance to the Union Street Station Restaurant in New Braunfels. 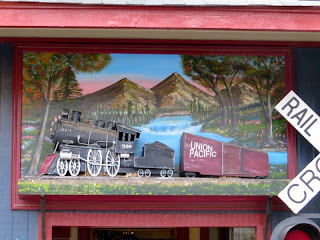 The Schlitterbahn Water Park is closed for the season, but it sure looks like fun for next summer! 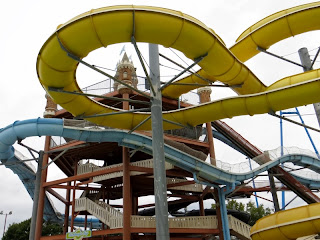 Just a little bit of walk left in us, enough to get us through some neighborhoods and back to the Faust Hotel.

With that, it was just a hop, skip and a jump to finish our 11k (6.8 mile) walk. A very satisfying day indeed.

You can read about our best Wurstfest experience in my next blog.

Posted by TravelBug-Susan at 6:45 PM