...continued from my blog earlier today about the New Braunfels Volksmarch.

When we arrived at the backside of the Wurstfest grounds, we pulled out our Wurstfest tickets and entered through Gate #3. To our left was a small tent with a band playing oom-pah-pah music and they had the crowd singing "Ein, Zwei, Gzuffa!" a German beer-drinking song. Welcome to Wurstfest.

We spent an hour walking through the Marktplatz and Festhalle checking out food offerings, souvenirs and people. People watching provided much entertainment, especially those in costume, i.e., a black and white cow, people with hats of all sizes and types, dirndls and lederhosen, and assorted other unique looks.

Here are pictures of some of the things we saw: 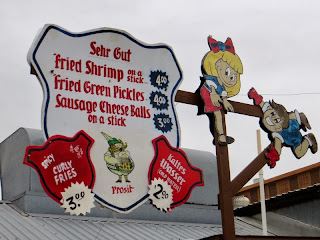 Fried green pickles? We even saw fried Kool Aid. How do they do that?? 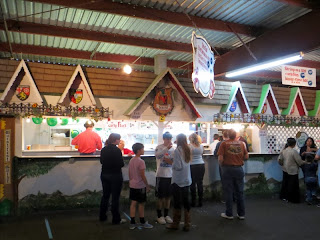 With so many choices of food, we finally settled on turkey Reuben sandwiches. We took them into the Festhalle where we ate them with entertainment provided by a very talented German band and people polka-ing on the super-sized dance floor.

After lunch, we hit up Naegelin's Bakery booth. Bob chose peach strudel and I had cherry strudel. After walking around another time, we also ordered one piece of German chocolate cake to share. Good times. Bob didn't even have to do the chicken dance...they didn't play it while we were there. 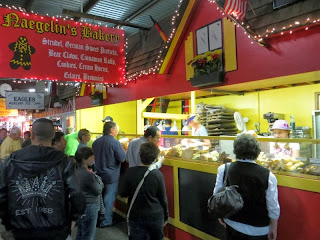 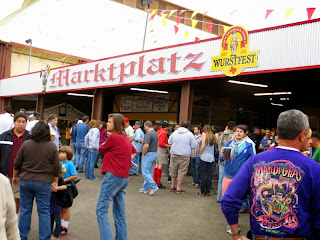 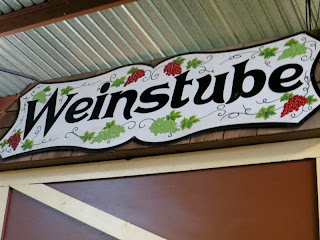 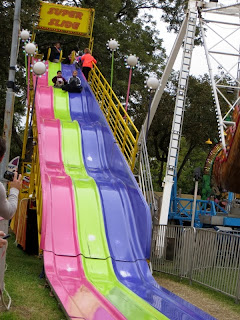 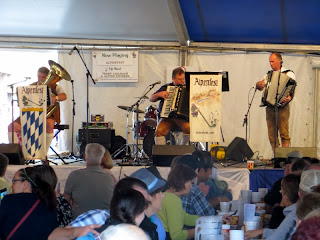 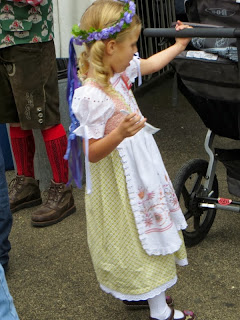 The Rotary Club had the most popular food booth with lines that snaked around both sides of their booth. They had the only Kartoffelpuffer mit Apfelmus (potato pancakes with applesauce). When we go next year, I want to go early enough to be at the front of the line! 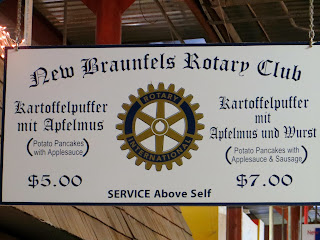 And that was our first experience of Wurstfest, but it won't be our last!