We took it easy and got up at 9:00 a.m. Yesterday was a long day! No bison in the campsite this morning.

For breakfast, we had whole-grain pancakes, turkey bacon, fried eggs and real maple syrup. So good.

We vacuumed the 5er and packed up a few things for short hikes: water, trail mix. Today an easy day is planned.

I got the Crockpot loaded up with Cherried Chicken: boneless skinless chicken breasts sprinkled with an herb-pepper mix, canned Bing cherries, a bottle of chili sauce, ½ c. packed brown sugar and set it on low. Dinner will be ready in 5-6 hours.

About noon, we headed out to hike the short boardwalk at LeHardy Rapids. Today is cloudy and cool, 65 degrees. The rapids are a short side-trip, good for a quieter day. While we walked the boardwalk, the rain started, just a sprinkle. 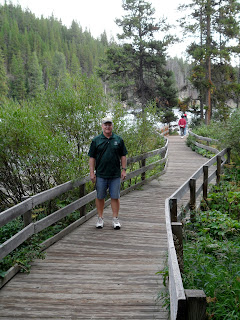 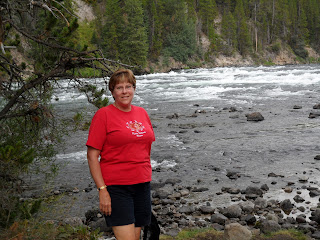 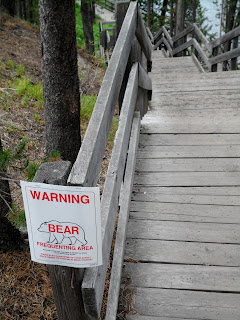 From LeHardy Rapids, we drove a short distance (through ANOTHER bison traffic jam) to the Mud Volcano area. From the parking lot, we headed to Dragon’s Mouth Spring. Eerie area. A booming sound comes out of the earth along with puffs of steam. Does Puff the Magic Dragon live there? 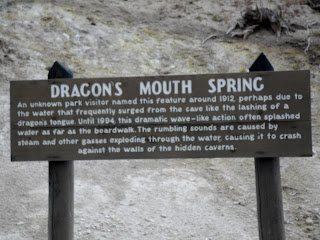 The trail continued up a hill where we saw fumaroles, mud pots, boiling lakes. As we approached the top of the hill, thunder boomed, lightning flashed. No cover! We walked faster. The rain pelted us. More lightning, more thunder immediately following. This storm was right on top of us. Bob loaned me his baseball cap because my hair was getting soaked. I had on shorts, a T-shirt and a fleece jacket. The fleece was wet on the outside, but not the inside. We put our hiking legs into high gear and booked it down the hill back to the truck. About five minutes later the rain stopped.

We drove up to Canyon trying to find a cell phone signal as we had one there the other day. No luck. That was the end of our easy day. We went back to the 5er and got stuck in not one, but two, bison traffic jams. Those bison move around a lot.

Bob decided to pay for 24 hours of internet access. I am sitting in Lake Lodge posting three days’ worth of blogs. As I’ve been sitting here, I’ve seen the beautiful mountains across Lake Yellowstone in silhouette with the whitish clouds behind them. Since then, the clouds have descended to lake level, it is raining, the temperature has dropped about 15 degrees and I can’t see across the lake.

Bob went to the point where he usually gets internet service so he could take care of some business. Then he was going to run. He told me he’d be back in two hours. Usually he’s on time because he knows I worry. It’s been almost three hours and no Bob. Since we have no cell phone service, he can’t call me. Where he went running is an area now populated with bison. I hope he didn’t get hurt. He could also be late if he’s stuck in a bison traffic jam or if he had more business on the phone than he originally thought. Maybe he went back to the 5er for a shower after his run and to put on dry clothes. I do get worried. I hope he shows up soon because I’m cold and don’t have keys to the 5er or a way to get back there. Oh, whew, I just saw him drive by!! He’ll be in here soon.

Now we can head back to the 5er and eat our Cherried Chicken. I’m happy he’s okay!

After dinner, we plan to come back to the lodge to finish up on the internet.

Dinner is finished. We had Cherried Chicken and corn on the cob. We’re back at Lake Lodge and I’ll finish up my blogs, check email and spend a little time on Facebook.

Travel Bug out.
Posted by TravelBug-Susan at 1:09 AM