Heading out on the highway with less hair on my head. I was lucky to get an appointment with Virginia at Appearances Unlimited in Thermopolis, Wyoming. My hair has been driving me crazy since my last haircut. My old haircut looked like Captain Kangaroo's, you know, the picture that's been going around on Facebook saying, "Click Like if you know who this is." Basically meaning you're a geezer if you're old enough to know who Captain Kangaroo is. Anyway, now my hair is the way I like it and will grow out nicely. 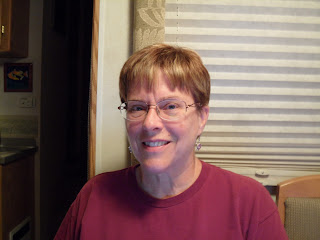 My hair appointment ended at 9:00 a.m. and Bob was out front of the salon waiting in the 5er. We headed south on US 20 out of Thermopolis through Wind River Canyon.

Both of us were impressed by the rugged rock canyon and the Big Horn/Wind River flowing through. (Big Horn River and Wind River are the same river--just named by two different parties of people. It changes names at Wedding of the Waters just as you head into Wind River Canyon.)

We saw the Boysen Dam and Boysen Reservoir. That reservoir is huge! Then, as Bob says, "We had to drive through a whole lot of nothing to get to something."


At Shoshone, we went east on US 20/26 to Casper where we had lunch at Subway. Then we took I-25 east to Orin where we headed north on US 18 to SR 89 to Custer City. In Custer City we headed east on 16A, then north on Route 87 & Playhouse Rd back to 16A, turned right on 16A (AKA Iron Mountain Road) to Spokane Creek Campground. We arrived at 5:45 p.m. and booked three nights. [Note: This may sound like a circuitous route. That's because we wanted to avoid as many high passes as we could. We did a good job of it.]

Along the way to The Black Hills there were places we passed where we would like to stop the next time through: (1) viewpoint of Hell's Half Acre in Wyoming on US 20/26; (2) National Historic Trails Interpretive Center in Casper, Wyoming; (3) Ft. Fetterman State Historic Park near Douglas, Wyoming. Of course there are always historic markers along the highway we'd like to read, but towing the 5er makes it a bit more challenging to stop at all of them.

Howard and Linda of RV-Dreams.com recommended Spokane Creek Campground in The Black Hills. It is lovely. When we arrived this afternoon, there was a flock of wild turkeys at one end of the campground. Tonight, when we returned from the night show at Mt. Rushmore (more on that shortly), there were three young white-tailed bucks at the entrance to the campground. Our site backs up to the forest so the view out our back window is of trees. So nice. We don't feel smashed in next to our neighbors and no trees blocked our slide-outs.

We ate our dinner in the 5er, then drove Hwy. 16A to Mt. Rushmore. It was early evening and the white-tailed deer were out. The drive over 16A was gorgeous; however, there were many hairpin turns, four one-lane tunnels, and pig-tail turns with bridges. It was a slow go. We arrived at Mt. Rushmore parking ($11.00) at 7:30 p.m. The evening show started in the huge outdoor amphitheater at 8:00 p.m. Once again, good timing on our part.

Twilight turned to night. Bats fluttered about overhead devouring bugs in the spotlights.

At the end of the movie, the presidents' heads on Mt. Rushmore are illuminated and everyone stands to sing the Star-Spangled Banner.

The park ranger then asked all military in the the audience to go to the stage. There were so many that they filled in four rows across the huge stage. She went down the rows and asked each of them to state their name, where they're from and which branch of the service they represent. The rest of the audience gave them a standing ovation.


We plan to go back during the day and watch the movie in the Visitor Center and hike the trails. In planning our trip, it looks like we'll be doing a lot of Scenic Drives to see the beauty of the area. There is a Wildlife Loop Road in Custer State Park, The Needles Highway, Peter Norbeck Scenic Highway, and we want to go up to Spearfish Canyon Scenic Byway to see three waterfalls.

We may add another night at this campground because we also want to tour the Minuteman Missile National Historic Site and Badlands National Park. We could probably fit those items into a third day in the area.


Everything is subject to change depending on how our days pan out. We'll keep you posted.

Travel Bug out.
Posted by TravelBug-Susan at 12:46 AM