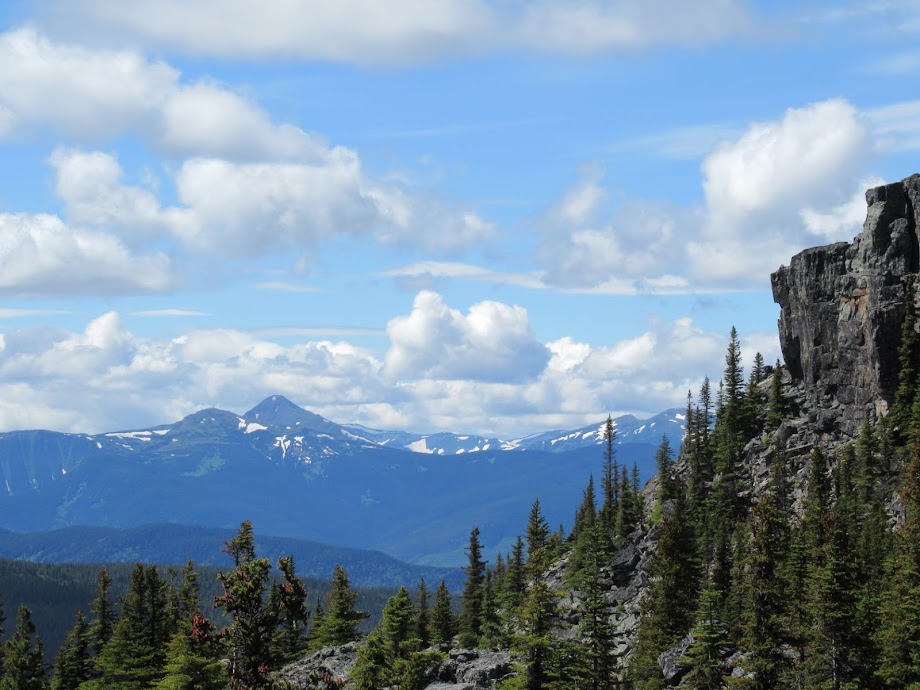 Today we were up bright and early for a long drive to North Platte, Nebraska. After picking up our cinnamon rolls at the campground cafe, we started out at 8:00 a.m.


Here's some helpful information if you want to drive to Spokane Creek Campground in a motor home or pulling a trailer and you're arriving in The Black Hills from the east or the south. There are some very steep grades, small tunnels and sharp curves on some routes so know where you're going.

When we entered Custer State Park from the south, we came up US 385/SD Hwy 89 to Custer City, then headed east on Hwy 16A. At the entrance gate to Custer State Park, we asked about the best way to get to Spokane Creek Campground and we were told to take 16A to Route 87 (Playhouse Road) north to Iron Mountain Road then turn south about a mile to the campground. That was a pretty good road to take, but narrow with a couple of "iffy"-looking wood bridges. We made it over the bridges and through the road by driving slowly and carefully.

When it was time to leave the campground today and head east out of the park, we knew we didn't want to take Hwy 40 east because it had a 15% grade for about 3/4 mile going down the hill. We decided to go south on Iron Mountain Road through Custer State Park, then east on Hwy 36. That was a good way to go. It was necessary to go slow on Iron Mountain Road because of the narrow road with a hairpin turn and wildlife, but Hwy 36 was a great road from Iron Mountain Road to Hermosa. The grades were gradual, the road was good and the curves were wide and sweeping. Hwy 36 west of Iron Mountain Road had steeper grades, but we had bypassed those.

Onward south we traveled to Scotts Bluff, Nebraska where we joined The Oregon Trail in our modern covered wagon. Oh what the pioneers would have given to ride with us in luxury. This day was devoted to The Oregon Trail, The Mormon Pioneer Trail, The California Trail and the Pony Express Route. (Also following much of this route was the Lewis & Clark Trail.)

Our first stop on the trail was the Scotts Bluff National Monument at the site where the pioneers crossed through the bluff west of town. The slide show in the Visitor Center and the museum showed the hardships the pioneers endured--disease, heat, violent winds, buffalo stampedes, quicksand, unpredictable weather, robbers, worn out shoes, and, if they didn't start early enough in the year, they were crippled by winter storms. Only rarely were they attacked by Indians. Wagons were falling apart, people were throwing supplies off the wagons to make them lighter for the oxen pulling the wagon. This was the ultimate adventure of a lifetime. Either you were healthy and tough enough to make it or you died and were buried by the side of the trail. 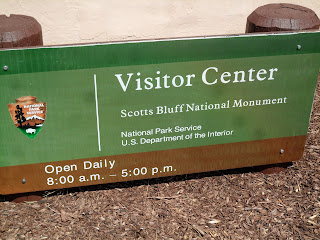 There were four types of wagons used by those crossing the country:

1. The Mormons had been persecuted and driven from their home in Nauvoo, Illinois. Most of them left with very few belongings and couldn't afford a covered wagon. They pulled these handcarts with the few possessions they had left.
2. A Murphy wagon. 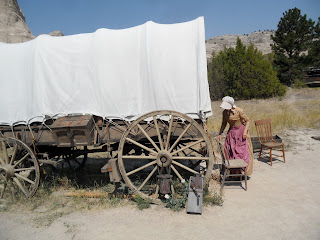 3. A Conestoga wagon. Not used very often as they were too big and cumbersome for the twists and turns of the trail. 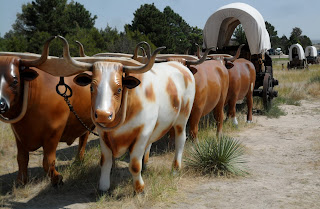 Can you imagine moving all your belongings across the country in one of these wagons while you walked alongside it? That's a lot of miles and that's why people's shoes wore out. At Scotts Bluff a third of the trail was behind them.

From Scotts Bluff we followed the trail east to Chimney Rock, a well-known landmark along the Oregon, California, and Mormon Pioneer Trails and Pony Express route. We saw the video at the Visitor Center and read accounts of the people who passed by. They were in awe of Chimney Rock after weeks crossing the flat plains. Chimney Rock was a geographic place marker that could be seen from 40 miles away.
Another place we wanted to learn about was Ash Hollow. Time was not our friend, however, as the Visitor Center closed at 4:00 p.m. on a Saturday and we arrived at 4:45 p.m. I did a take a picture of the history marker, however. 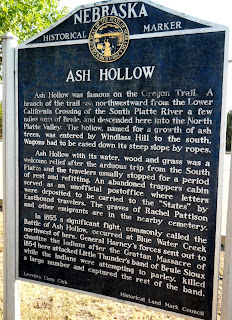 Our travels for the day ended at 8:00 p.m. at Lakeside Camping (a Passport America park) in North Platte, Nebraska. This park has no "it" factor. You get a gravel pull-through with full hook-ups, no wi-fi, no cable TV. There is a lake on the property but we were nowhere near it. Still, it was way better than what the Oregon Trail pioneers had!

When you factor in the time change, our travel time was 11 hours. It didn't feel like it, though, because we stopped so many times to get out, stretch and learn.

We're safe and sound. Thank you for reading.

Posted by TravelBug-Susan at 11:30 PM