When we were preparing to leave the campground, Bob checked the tire pressure on all our tires. Our 5er had one tire at 60 psi and one at 80 psi (normal tire pressure for our 5er is 100 psi per tire). Uh-oh. Sounds like something's amiss. He filled the low tires using his compressor, but it wasn't up to the task. Luckily a Pilot gas station was 1/8 mile away, so we pulled in there and he finished filling the tires.

We drove 17 miles to the Great Platte River Road Monument. When we parked the car to go into the museum Bob said, "We'll check the tire pressure again when we come out of the museum."

The museum inside the monument was a mysterious unknown to us. All I knew about it was another blogger had written about it and said what a good stop it was. We were greeted at the door by a man dressed in period garb who explained about the museum. Admission was $12 each. We felt like we were at Disneyland.

With our admission, we were given a set of headphones to listen to the narration for the exhibits we were about to enter. What a well-done "museum." It was divided into areas from the pioneer trail travelers and Pony Express, to the gold rush, to the railroads being built, and the advent of the personal freedom that came with automobile travel. I was very impressed! 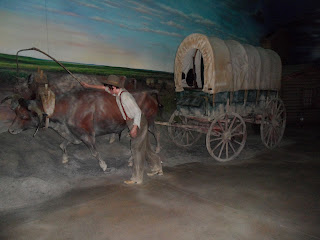 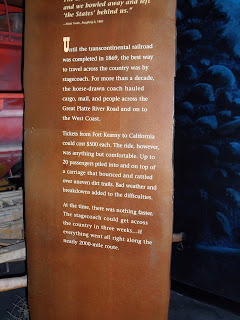 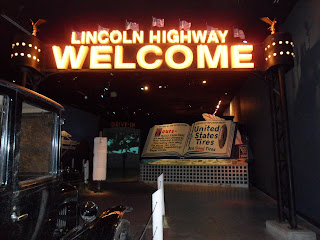 When we finished at the museum, Bob checked the tire pressure. One tire was down to 80 psi and another was at 90 psi. The tires had lost a lot of pressure in 1-1/2 hours. We knew then we had a problem.

Bob found Graham Tire in Kearney on the internet. Off we went to the north side of town and found Graham Tire. They had semis and RVs in their service area, so I felt they were knowledgeable about big rig tires and could handle working on ours.


Our first impression was good. We were greeted immediately and asked what the problem was. They were very customer oriented and let us know up front that we would have to wait 30 minutes. We were directed to their waiting area which had free, high-speed wi-fi. Really? Oh happy days! Bob and I went to the 5er and retrieved our laptops and connected to the world. Now you know how I was able to complete three blogs in one day. It was like finding an oasis after weeks in the desert. We are in civilization again.

After 1/2 hour, we were told they were moving it to take a look at it. Guess what? Two more of our rims had broken welds. We had bought a new rim a few weeks ago in Grand Junction, Colorado, now two more were broken. Bob decided enough was enough and replaced the three remaining rims. Now all four match. Since we had no use for the rims with cracked welds, Bob had the tire company recycle them.

Graham Tire only charged us $30 to install all three rims. They drove Bob over to the location that sold the wheels where they gave us a dealer discount. I think everything combined cost less than $200. If you are ever in Kearney, Nebraska and need new tires or repairs, be sure to stop in at Graham Tire. They are wonderful. We would also like to give a special shout out to Tyler who went above and beyond in his customer service. A big THANK YOU to the team at Graham Tire! All told, we were in and out in three hours.

It was 2:30 and we were hungry. Culver's in Kearney was down the street and we stopped to eat.

The rest of the day was spent driving to Salina, Kansas where we are staying at Sundowner West RV Park. This park is nice. It's terraced with a small lake we can see from our site. Good Sam rate is $26 per night. We have excellent free wi-fi. Pull-through sites are about 100' long.

[Note the morning after: With a better look at Sundowner West RV in daylight, I have to add that it is rather trashy, literally. The garbage cans are overflowing. Trash, cigarette butts and doggie doo are on the ground, so watch your step. The manager is a crusty old curmudgeoun. I had to pay for our stay since we arrived after 7:30 p.m. I walked up to the office and saw the manager driving up in a golf cart. I put my hand on the doorknob to open it and he said, "It ain't gonna open if I don't put this key in it." Well, alrighty then. I didn't know he was the only one working there. Most places have more than one person to work the campground.]

That's all for today.

Enjoy the rest of your week.

Posted by TravelBug-Susan at 1:13 AM